Our transport consultants have determined that vehicle access to the site can safely be taken from London Road in the form of a standard T-Junction. This will unfortunately require the removal of some of the trees along London Road but removals will be kept to a minimum consistent with safety and visibility requirements.

A 3-metre-wide shared footway & cycleway will be created on the western side of London Road up to the junction with Waterdell Lane, and down to a new dropped kerb crossing which pedestrians can use to cross London Road towards the public footpath heading to St Ippolyts Church. 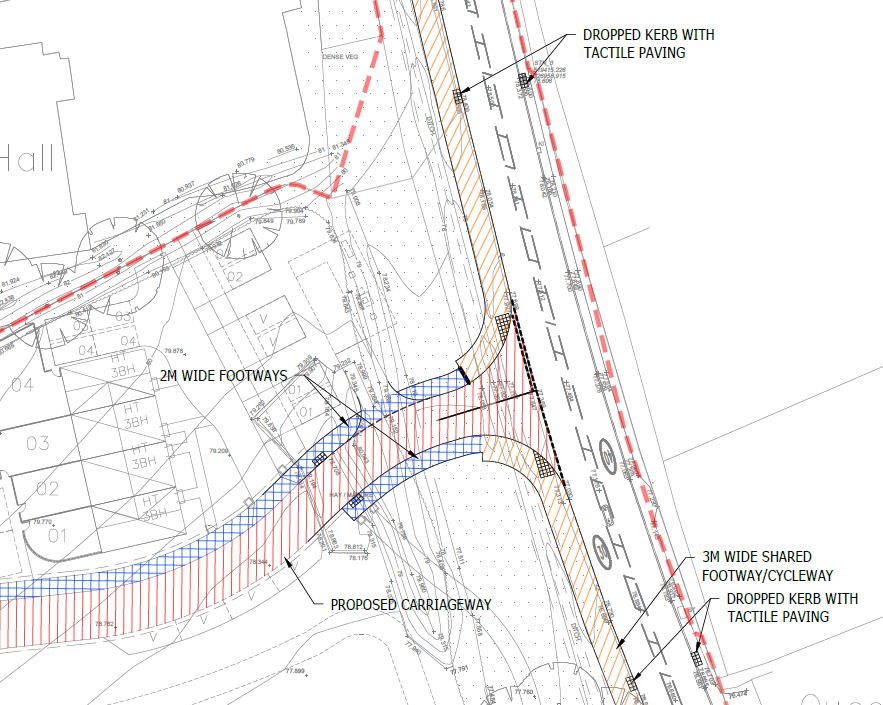 As part of our investigations into the suitability of London Road as the sole vehicle access, two speed surveys were commissioned by Countryside to assess the speeds of cars driven along that section of London Road. A manual radar speed survey showed that ’85th percentile’ speed was 34 mph northbound and 32 mph southbound (rounded to the nearest whole number), while an Automatic Traffic Count (ATC) survey showed that the 85th percentile was 38.72 mph northbound and 40.22 mph southbound.

(85th percentile = the 85th highest of 100 speeds recorded; a standard measure of speeds to ignore outliers that would otherwise be included if you used a simple average figure of all speeds.)

Responding to these survey results, the proposed junction has been designed so that it can achieve sufficiently large visibility splays (i.e. visibility along London Road for the driver turning left or right out of the development) appropriate for the speeds identified in both surveys. The results of the ATC survey necessitate a larger visibility splay than the manual speed survey, as the speeds captured by the ATC survey were higher.

Improvements are also proposed to the informal pedestrian crossing over Brookend Lane, opposite Waterdell Lane, with the footway on the southern side expanded to 2 metres and dropped kerbs installed on both sides of the road: 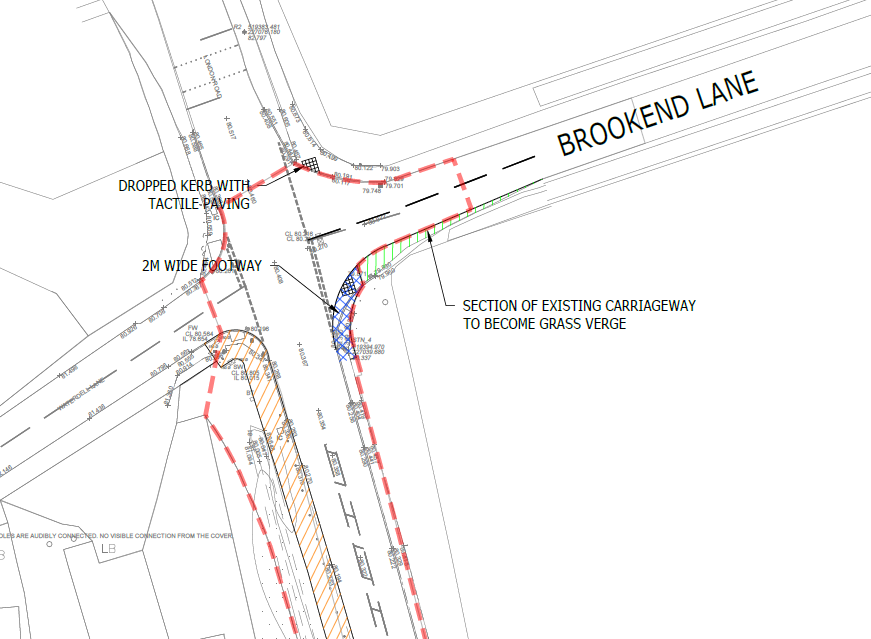 The proposed pedestrian improvements at the Brookend Lane crossing

A new staggered railing will be installed at the entrance / exit to the Public Right of Way, and a secondary pedestrian access provided into the site in the direction of the large area of public space to the south-west, providing an easy route for existing Gosmore residents to access this space. 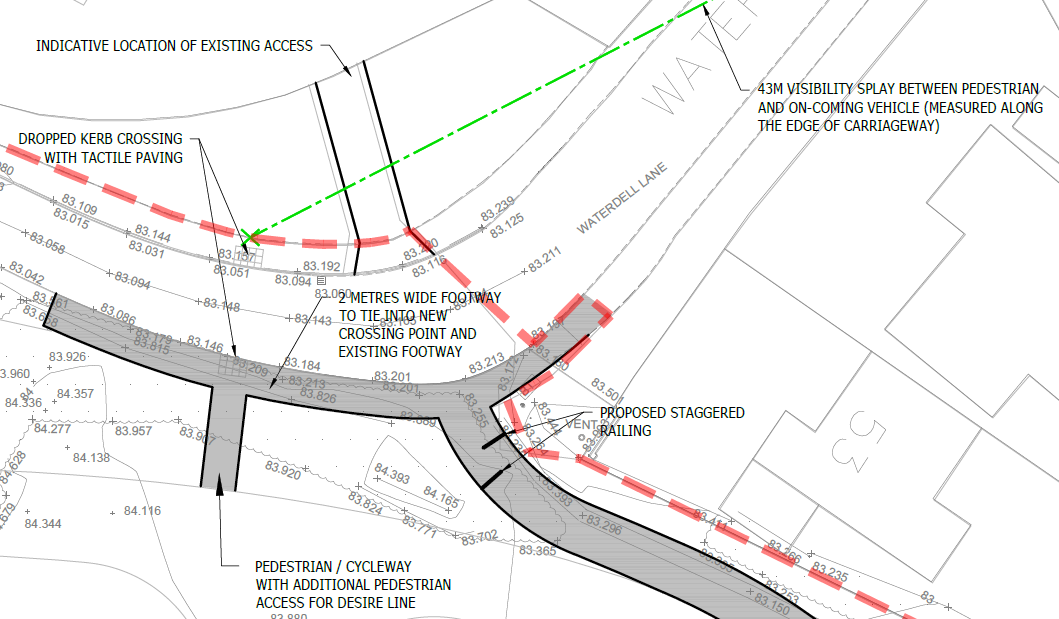 At the other end of the Public Right of Way, the access to / from Half Handkerchief Lane will be widened to 3 metres and a railing installed to improve visibility and safety for pedestrians and cyclists exiting onto the lane.

The proposed pedestrian improvements at Half Handkerchief Lane

The Environment Agency’s mapping indicates that the entire site is in Flood Zone 1, which means that the site has less than a 1 in 1,000 year probability of river or sea flooding (i.e. low probability).

The Environment Agency’s flood maps for surface water indicate that there is a small area of the site with a ‘low risk’ of surface water flooding. In order to mitigate this the most viable method is to place a single attenuation pond in the lowest part of the site in the eastern corner, adjacent to the Ice House. 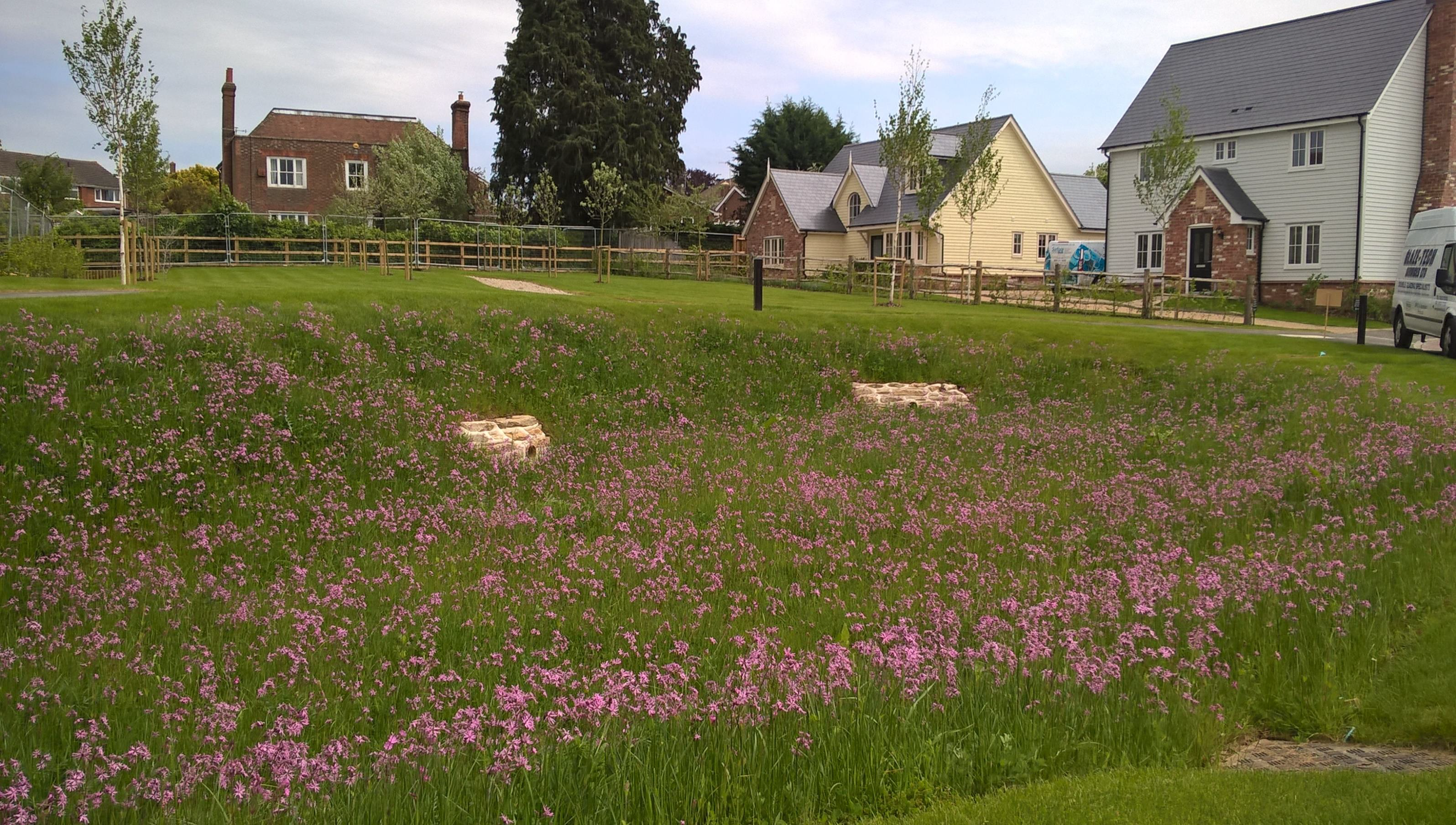 This will be a ‘dry’ pond – in other words dry most of the time, but there to collect surface water-run off during a period of very heavy rainfall (a 1 in 100 year storm) to prevent the site from flooding. Once collected the water will slowly dissipate, draining through the ground. 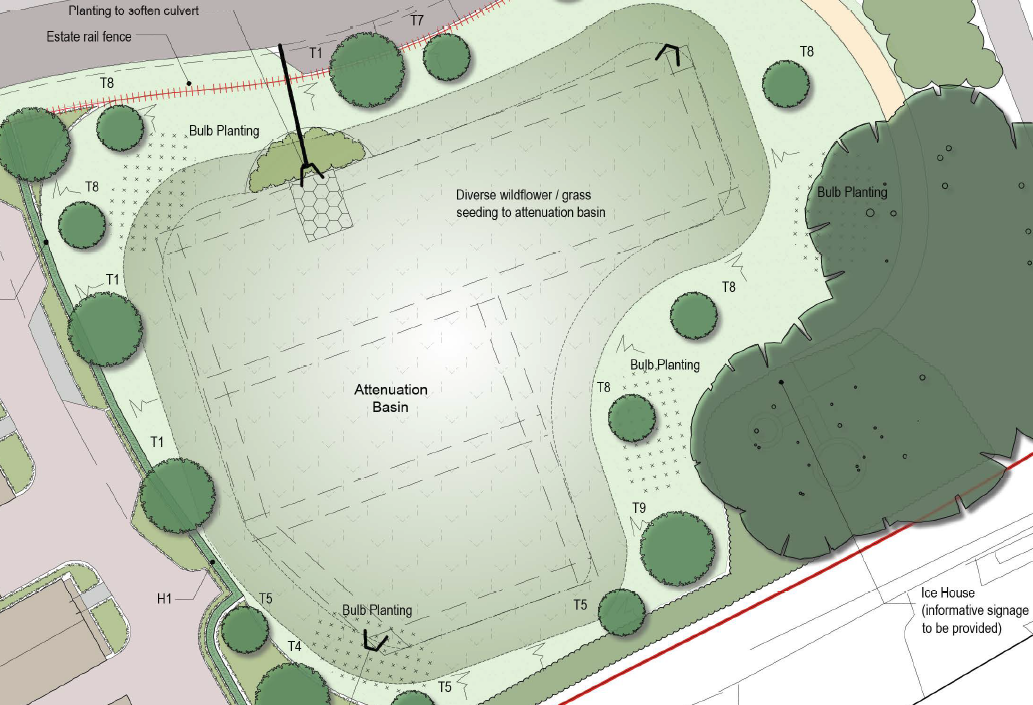 The proposed attenuation pond as seen on the Landscape Strategy plan

If you have any queries, please contact Adam Robinson of SP Broadway on
07711 262 925 or at adam@spbroadway.com